Body changes during pregnancy and early precautions
klearningstuff
| No Comments

During pregnancy, the body goes through a lot of changes.It includes changes in the uterus, cervix, vagina, cardiovascular system, gastrointestinal system, and urinary system. It also changes the skin and breasts. So we can say, body changes during pregnancy are very common nowadays. Estrogen and Progesterone are the chief hormones that play a major role throughout pregnancy.

High estrogen levels promote maternal flow within the uterus and placenta. High levels of progesterone cause an increase in maternal tissues such as breasts, and the uterus to accommodate the growing baby. These changes might also lead to mood swings, anxiety, depression, restlessness, and so on.

Changes in the cardiovascular system:

The heart may increase in size due to the increased load on it. During the second trimester, the heart works 40% extra harder than non-pregnant women. It is due to an increase in blood volume.

The volume of blood increases gradually by 30-50% in pregnant women, so at the end of pregnancy, the female has 1.5 liters of blood compared to nonpregnant females.

Many women feel dizzy during pregnancy in the first trimester due to a decrease in blood pressure.

Hormone progesterone causes sudden relaxation in the blood vessels. It results in a feeling of acute dizziness and a brief period of unconsciousness.

Fluid often builds up in the legs and feet of pregnant women are the first trimester instead of being absorbed in the blood circulation.

It leads to a condition called edema. This is a very common condition and happens due to long-standing for hours.

During pregnancy, a female finds it difficult to breathe normally as the growing fetus puts pressure upwards towards the lungs making them compact.

Changes in the gastrointestinal system:

Many women experience nausea and morning sickness in the initial weeks of pregnancy. As the pregnancy progresses indigestion and heartburn are very common because the growing baby crowds the mother’s stomach and pushes it higher than usual due to which causes reflux of acids into the chest. In such cases, pregnant females should have small and frequent meals and shouldn’t lie down up to 2 hours after a meal.

Frequent urination is a major change that happens in pregnant females especially in the first and third trimester of pregnancy. The growing baby puts a lot of pressure on the bladder causing an urge to urinate frequently.

Excessive water retention in the feet and legs is also responsible for frequent urination, especially during the nights.

On one hand, the pregnant female has bladder incontinence and on the other hand, due to increased pressure of hormones on the muscles of the bladder, she feels constipated.

Changes in the skin:

Some females produce brownish or yellowish patches on the forehead and face. This condition called chloasma or mask of pregnancy.

It usually begins at the 16th week of pregnancy i.e in the second trimester and goes away after delivery.

More other changes in the skin would be acne due to the production of excessive oil. Heat rashes over the skin.

Stretch marks in the abdomen, thigh, and breast regions due to increased elasticity of the skin.

Some females might also observe a dark line near the umbilicus and pubic bone. It is a hormone-induced which causes increased pigmentation and fades away after delivery.

Changes in the breast :

Changes in the bra size are the first thing one might observe in the initial months of pregnancy all thanks to high levels of hormones estrogen and progesterone. This might happen throughout the pregnancy as there is an increase in the size of the ribcage and the formation of milk-producing glands.

The areola around the nipples darken and Montgomery’s gland enlarges and tends to produce.

During the 16th week of pregnancy, the breasts start producing colostrum which is also known as immature milk high in nutrients and antibodies. It is a blessing for newborn babies.

Most of the weight gain during pregnancy is not because of fat but due to the increased maternal tissues and the growing fetus. The following table shows the weight gain. 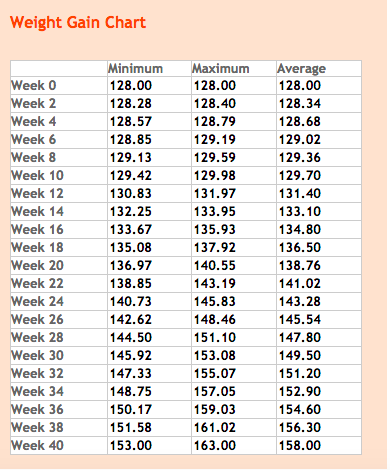 Most of the weight gain during pregnancy is not because of fat but due to the increased maternal tissues and the growing fetus. The following table shows the weight gain.

Pregnancy also is known as gestation is a beautiful and amazing phase in a women’s life that lasts about 40 weeks and is divided into three trimesters.

A female goes through a lot of changes during this phase physically, physiologically, emotionally, and mentally.

A healthy pregnancy eventually leads to a healthy baby and this is attributed to the fact that the mother is free from diseases and deficiencies and gaining enough weight to support the new life inside her.